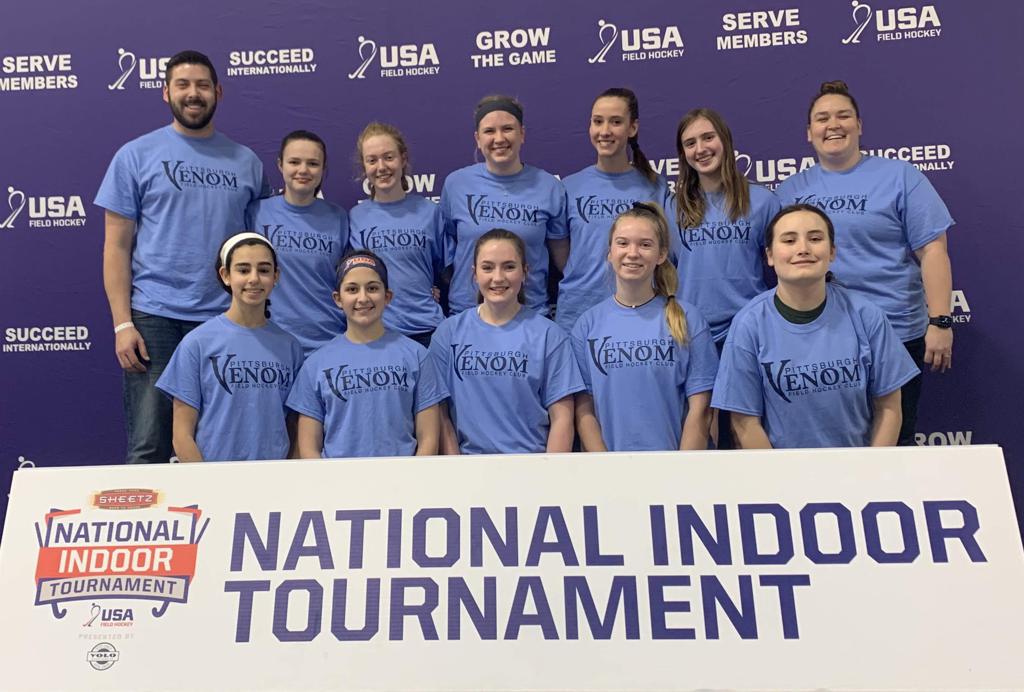 On February 28th the U-16 Boomslang team travelled back to Spooky Nook in Lancaster, PA to compete at the 2020 U-16 USAFH National Indoor Tournament. By qualifying 6th in Ithaca, NY the U-16's were placed into the highest-ranking pool of any Venom team to date. With an extra month of training after the regular season, they were ready to compete!

The tournament kicked off on the Friday with a very strong New Heights Blue team who came in from New Jersey. The game gave us a clear indication of how tough this tournament was going to be as both teams came out of the gate storming. If there was any sense of nerves or apprehension it was dispelled when the whistle blew as the game was tense back & forth with multiple chances for both teams. New Heights scored first finding a gap in the Venom defence, not for long as #12 Ava Hershberger cruised past the New Heights defence to put away her first. The play was very even as they put another goal in free play. With some clever passing,  #21 Callie Rautenbach slotted away our second to bring the score level 2-2 at half time. The second half was much of the same with both teams putting away their chances with #12 Ava Hershberger & #21 Callie Rautenbach getting another one each. Neither team looked like they were going to buckle & as the horn went to end the game the score remained tied 4-4.

On Day 2 all the teams had a good idea of what level of play was to be expected & our 2nd game of the tournament was against a formidable Mayhem Hawkeyes who hail from Philadelphia. The cross-state rivals proved to be a tough opponent as the game started with very little scoring. Chances were few & far between as both defences held strong. Our GK #92 Jordan Ashbaugh coupled with her defence #81 Dani Deer & #8 Annabelle Rose, they kept Mayhem at bay until one lucky passing play on a counter-attack put Mayhem ahead. Not for long as #12 Ava Hershberger brought the game level at 1-1. The second half was much of the same with multiple near misses on the Venom end & Mayhem making the most of their chances & Venom was soon looking at the wrong side of a 3-1 score. With another great running play from #12 Ava Hershberger & some excellent passing from #100 Isabella Arnold & the defence they brought the game within 1 goal. Even after pulling our GK #92 Ashbaugh & with the extra field player we gained the momentum. The mayhem defence & GK held strong & by the time the final whistle blew Mayhem handed Venom the close 1 goal loss.

Knowing now that to win the National Championship we needed some help, all we could do was control the next game until we got to the end of Sunday. North East Elite, a strong team from New Hampshire was next & knowing that we now needed the goal differential to potentially win, the U-16's came out of the gate firing in the final game of Day 2. With a renewed vigour most of the possession was with Venom. Not giving up an inch in the first half the team looked dominant by gaining Penalty Corners (PC) & pressuring NE Elite into their own half. We got goals from #83 Abby Hershberger & two from #12 Ava Hershberger. Lookin comfortably in the lead & with some substitutions, we gained another short corner & defender #8 Annabelle Rose stepped up to take the PC & with a great shot to the bottom right corner of the goal. #8 Rose got a very rare Defender goal. With one unlucky odd-numbered breakaway NE Elite found one goal to ruin the clean sheet & the game ended at 4-1 to put venom comfortable at the top half of the table battling with New Heights & Mayhem for the Championship.

The final day of Nationals started against Central Pennsylvania FH who showed up to play, as by now all the teams have gotten accustomed to the level of play & there was no one who is in any doubt of the skill & level of play. With some clever passing from #9 Julia DeFoggia, #62 Lauren Kampi & #21 Callie Rautenbach the team was able to get the ball in the CPFH goal 3 times with #12 Ava Hershberger getting the final touch on all three to give her a Hat-Trick in the game! A dominating performance came under scrutiny as CPFH didn't give up & they got 2 goals in the second half of the game to bring the scoreline closer than what the game felt like & as the final horn blew the score remained in the favour of Venom giving us a second win by a margin of 3-2.

With Mayhem beating New Heights in the previous game we now knew that the National Championship was out of reach. Not to be discouraged we knew that 2nd place was still up for grabs but that was all resting on a final win for the U-16's. With that knowledge, they came out of the gates in the final game of the tournament & really put pressure on Hymax Wildcats. An early PC gave #12 Ava Hersberger her 10th of the tournament & the entire team stepped up in this final game of the season. Great standout performances from #6 Aly Solomon who coupled with captain #9 DeFoggia managed to get the ball to #62 Kampi. She made an excellent move around the winger, took the ball to the baseline & sent it across to a waiting #21 Rautenbach who rang the board in the goal to give Venom the 2 goal cushion. With 2nd place insights they locked down the game by playing clever defensive hockey but it wasn't enough, as late in the game Hymax broke through on a counter-attack & putting in a late consolation goal but soon after the final horn of the season blew & Venom was looking at a 2-1 scoreline in their favour to take 2nd place at Nationals!

With this 2nd place finish at Nationals, they became the most successful Venom U-16 team in our short history & we cant wait to see what you do in the future. We want to congratulate #6 Solomon who gained the most improved of the tournament award & to #8 Rose who earned the most improved in the season award.

Special Congratulations to #12 Ava Hershberger who earned the top-scorer of the tournament with 10 goals. With that, the 13-year-old competed in all three age divisions at Nationals this year & with these 0 goals that brought her Nationals season total to 38!

What an unbelievable achievement from all on the team as they came away with the silver! Congratulations on a terrific season!