Our U-19 King Cobras travelled to Richmond, VA to participate in the 2020 USAFH National Indoor Tournament! 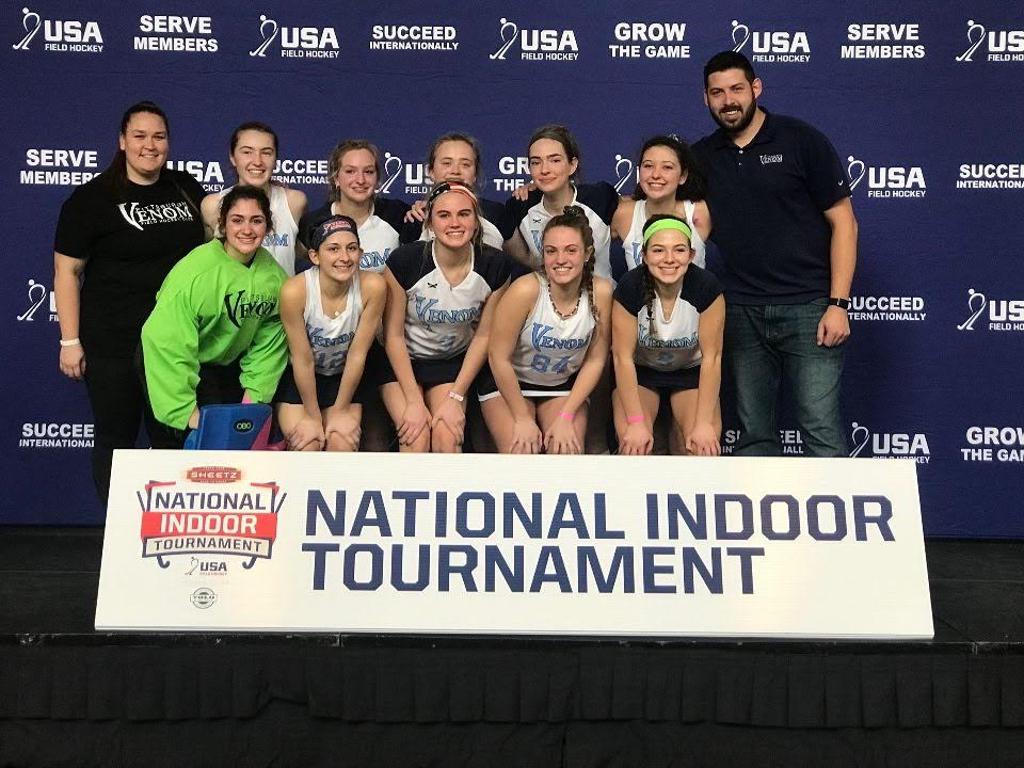 Last weekend the U-19 King Cobra's travelled down to Richmond, VA to take part in the 2020 USA Field Hockey National Indoor Tournament. The U-19's gained their spot at Nationals in the 11th hour as they missed their qualification by a double shootout. There were 32 9th place teams that just missed qualification & only 2 At-Large spots in the nation. Our King Cobra's were one of the two selected & so they were ready to show up in Virginia!

Day 1 started with one game against Souderton Strikers from just outside Philadelphia, PA. As always the first games are up in the air with Nationals Nerves & feeling out the tournament. King Cobras controlled the majority of the game with great ball possession & team structure. They probed the Souderton defence but with a combination of some great saves, hitting the post & crossbar the game was entering the final minutes of the game still tied 0-0. Souderton drew back into a defensive structure as the Venom offence closed in. After a series of several short corners, the dam broke with a clever short corner play from #9 Pfeifer Hil to #12 Ava Hershberger with less than a minute left on the clock sealed the narrow victory for Venom 1-0.

On Day 2 our first game was against HTC from CT. We knew that it was going to be a hard-fought game & it didn't disappoint. A well-structured team from the New England held strong against us with great defensive hockey keeping the score deadlocked as defenders #61 Raina Dodson, #53 Natalie Loftus, #2 Maria Duchi & captain #3 Nica Schratz held strong in front of goalkeeper #96 Gwen Hershberger.  In the second half saw the only real opportunity go in the back of the net for HTC to hand the King Cobras a very close 1-0 loss.

The second game of Day 2 was against SPark White. The Maryland team were another tough opponent with a well-drilled structure kept the Venom chances at a minimum but with most of the possession, it was only a matter of time before the Venom forwards would pierce the defence. With some great link-up play from #84 Ella Strzempek, #37 Ally Barcaskey to #12 Hershberger to get a goal. With a fantastic penalty corner gave defender #61 Dodson a rare penalty corner goal. With only one mistake in the backfield allowing SPark to put on in the cage & multiple formation changes coupled with pulling the goalkeeper with 1 min left they couldn't break through once more & the final horn went with Venom getting the 2-1 victory.

The final day started with the top three teams South Jersey Edge, HTC & Venom, all vying for the National Championship. Our first game of the day was against South Jersey Edge. Knowing this was going to be a difficult game against the very successful club from New Jersey, there was another level of play we had to come onto the court with. The first half was fast & frantic with multiple chances for both teams as the pace kept increasing. Stunning plays from goalkeeper #96 Gwen Hershberger with one particular full stretch diving stick save to keep Venom well into the game. The game went back & forth with Venom goals from captain #91 Georgia Eson & #12 Hershberger the 1st half ended tied at 2-2. The second half started with as much intensity but the bounces seemed to go in favour of South Jersey Edge with great defensive play coupled with Venom shots hitting posts or narrowly missing wide of the goal the Venom scoring dried up, once the horn blew to end the game the dust settled with South Jersey edge with 6 goals & Venom wit just 2.

The final game of the day was against another New Jersey team, Stong Island Sharks. With this being the final game of the season the Venom U-19's rallied together to keep the pace from the previous game to end on a high note with 2nd place in the tournament still within reach depending on goal differences. With some great link-up play the Venom attack looked strong with the Strong Island defence buckling to captain #9 Pfeifer Hill getting her first of the tournament. Once the dam broke the goals kept going in with #3 Schratz getting in on the action as well as #12 Hershberger getting two herself. Strong Island didn't roll over,  putting two in themselves to end the tournament with Venom ending on a high note with a 4-2 victory.

This year was only the second time ever our U-19's have qualified for Nationals. With a record of 3W-2L-0T, our Venom King Cobra's placed 3rd behind HTC in 2nd with South Jersey Edge becoming National Champions. Congratulations on your 3rd place! Special mention to 13-year-old #12 Ava Hershberger who was the team-leading goal scorer with 5!

We would like to wish all the seniors good luck at college next year, thank you for your effort & passion making us the club we are today!

Congratulations on such a fantastic season!