A re-cap of the 2020 USA National Indoor Tournament Championship.

The weekend started against  Freedom HKY Leopards hailing from Maryland. The game started back & forth with trading goals with neither side gaining a significant advantage. #12 Ava Hersberger scored both goals, one on a Short Corner set-piece & one with a Penalty Stroke. Halftime came with the score tied. Shaking off the initial nerves of being at Nationals, the team rallied together & gained the majority of possession. With sustained pressure, the Freedom defence cracked & with great offensive play #32 Ava Avampato scored from a pass from captain #15 Mia Brinkley to put Venom up 3-2. #19 Josie Schomberg put the game away when she took a pass from #12 A. Hersberger and rattled the backboards to end the first day with a decisive win.

Day 2 started later in the day with Venom playing night games. The next opponent was Focus Pink. The game started like the first game ended. Sustained pressure, possession & quality finishing lead to Venom taking the early lead. #12 A. Hersberger had a breakout game slotting in 5 goals. Focus got one consolation goal. After the game looked like it was going to end 5-1 a late short corner #123 Ava Zimmer took the initial shot hitting the goalkeeper, she received the rebound and put the ball between the GK's legs to end the game 6-1.

The second game of the day was against NJStarz White. The U-14's didn't take the foot off the gas & kept putting in goals with a combination of great overall play, expert dribbling & an opposition Goalkeeper injury which kept her out of the game for 15mins. #12 A. Hersberger put away all 6 goals with helpers from #14 Sophia Hersberger, #20 Isabella Elm, #18 Aisley Shusko, #122 Ava Williams & #33 Liliana Rose. #91 Kayla Joyce (GK) kept them at bay until one unlucky odd-man breakaway broke the shutout but with only one goal against #Joyce got her 3rd W.

The final day of the tournament started in high spirits being only two wins away from the National Championship. The day started against Buffalo Hurricanes. #20 Elm scored her first then #12 Hersbeger slotted in 5 more. Buffalo got 2 goals then #20 Elm got her second of the day to cap the game at 7-2, leading Venom into a true National Championship as the final game of the tournament was against also undefeated True Grit.

The last game of the tournament leads to a true National Championship game as both teams were sitting at a 4-0-0 record. With True Grit sitting at +20 goal differential & Venom on a +17, winning the game is the only option if our U-14's want to win the big show. The whistle blows as tensions were at a peak & we could get the final match of the season underway. In the first minute of the game, a short corner for True Grit put away their first attack past the Venom defence, putting us behind for the first time this weekend. Without buckling the ladies found their resolve & shortly afterwards #12 A. Hersberger put them level 1-1 from a Short Corner.  The game went back & forth until halftime with #Hersberger putting in two more to gain the hat-trick once more, the game remained tied at 3-3 with 20mins left to play in the championship. After a quick pep talk & determined resolve, the play heated up on the Venom side of the court as quick play from the backfield of #123 Zimmer & #14 S. Hersberger up to #12 A. Hersberger in the midfield & #20 Elm & #15 Brinkley upfront. With a great baseline run from #122 Williams a sure goal was interrupted by a foul from the True Grip defence & the umpires called a Penalty Stroke. #12 A. Hersberger took the position & fired the ball into the top right corner to now give True Grit their first look from behind. The tension broke in the Venom stands as #12 A. Hersberger gained her 23rd goal of the tournament & 5th of the game on a short corner to gain a one-goal buffer leading the National Championship 5-3. With 3 minutes left on the clock, True Grit put one past the Venom stronghold to make the game 5-4. True Grit gained some sense of hope with that last goal & they came down the court looking to equalise but #91 Joyce stopped them short and got the ball to the offence who then took the ball down for 4 successive short corners whilst whittling down the clock. With Venom in possession, the final whistle rang out & with the score Pittsburgh Venom 5, True Grit 4. Handing Venom a very rare Back-To-Back National Championship by sweeping Pool BB & taking home the second ever National Championship for Field Hockey in the Western PA region.

Congratulations to our 2020 U-14 USAFH National Indoor Tournament Champions! 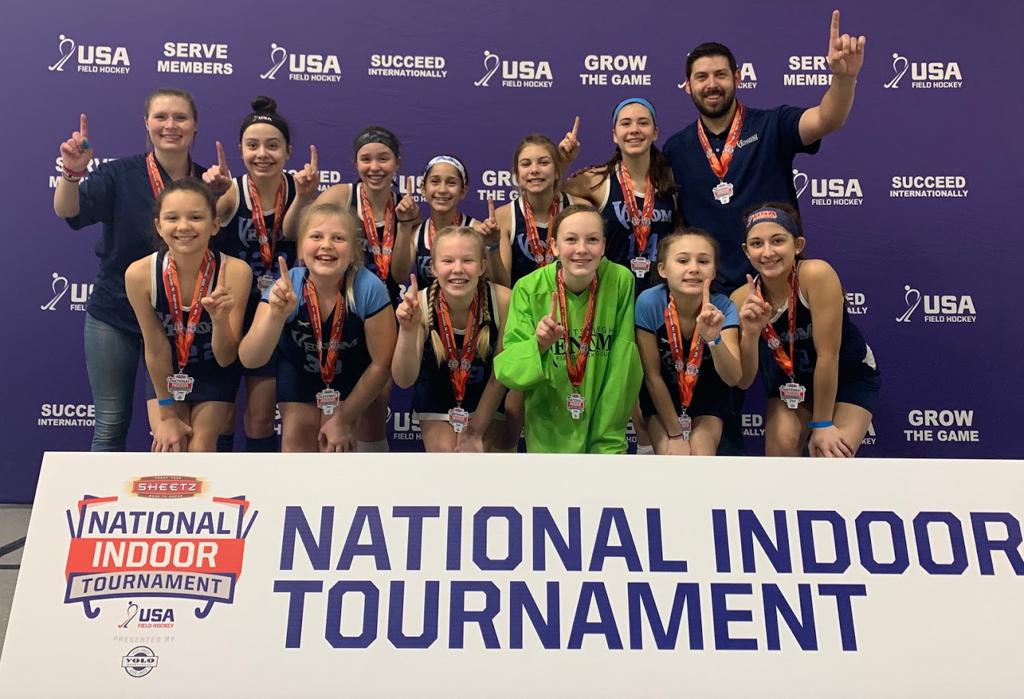